The only manipulation of the data collected by this CBS prior to uploading it is the use of PKWARE PKZIP file compression software to conserve disk space and to lessen file download times. The files are stored in a self-extracting EXE format.

The antenna for this station was positioned by the Utah County Surveyor's Office using three Trimble 4000SSE survey-grade GPS receivers occupying B-order HARN stations, and a Trimble 4000SSI survey-grade receiver occupying the CBS antenna location. The files from this CBS can be used for mapping-grade differential corrections within roughly a 300 mile radius

The station is housed in the County's Central Dispatch 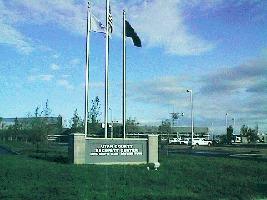 facility in the Utah County Security Center in Spanish Fork. The antenna is positioned atop the Center's telecommunications tower adjacent to the building. The data logging computer at the station is a 50 MHz 486 running MS-DOS 6.0 and PFCBS v2.23 software. It is connected to the Center's Novell LAN and the data is transferred to the County's ftp site each hour.

The method used to transfer data to the ftp site employs software called Map Assist 3.10A from Microtest, Inc., and a transfer program written in C by one of the County's computer programmers.

Having the station installed in Central Dispatch provides access to a very robust and stable operating environment. The file server which hosts the transfer program is the same machine that hosts the county's E-911 dispatch system, so it is very stable and reliable. The whole system is in an environmentally controlled room and is powered by a large un-interruptable power supply.

A concern in the installation of the system was the antenna's vulnerability to lightning strikes since the area in which the Security Center is located boasts one of the highest lightning strike counts in the valley. The grounding and lightning arrestor system in place on the telecommunications tower provides a high degree of protection. However, in addition to this system, we decided to install a static dissipator system and an antenna cable surge suppressor.

All of the hardware installation and computer programming associated with this station was performed by Utah County employees. The antenna was installed by Mike Christensen of the Telecommunications Division and positioned by the Surveying Division, under the direction of Gary Ratcliffe. The CBS hardware and associated software was installed by Donald Nay. The program that transfers data from the CBS to the ftp site was written by Diane Butler of the Information Systems Department. The web pages are created and maintained by Donald Nay. The Web Basic script that does the redirection from the web page to the ftp data directory was created by Neil Peterson, the IS Department Director. The station is operated by Donald Nay.

This CBS equipment was purchased through a cooperative agreement between Utah County, Brigham Young University, and Mountainland Association of Governments. The CBS is operated and maintained Utah County.